I “discovered” Piedmont Park by accident. It was 1960, and I was warming up for my race at a track meet at Grady Stadium. I was nervous, the track was crowded and I wanted to run away from the crowd to settle my mind. I ran across 10th Street and was drawn into the calming natural environment of Piedmont Park. I returned to the track and ran one of my best races that year.

Life experiences during the next decade brought me to Connecticut for college, sailing with the United States Navy off Vietnam, Tallahassee for graduate school and the Olympics in Munich, Germany. By 1975, I was drawn back to Atlanta and looking for the best location for my running store: Phidippides – the original running store in Atlanta, and in the United States.

Before choosing from three possible locations, I took a three-mile run around each store. Once I ran from Ansley Mall along Piedmont Road and found the Park, my choice was made. I remembered my run in high school and was excited to have the wonderful loops and fields so close to the store.

“Regardless of the number of stress items on my “to do list,” the Park’s calming hormones worked their magic as soon as I entered the tree-lined sanctuary.”

As Phidippides became the headquarters for the Peachtree Road Race during the big growth years of 1975-1978, I ran many miles throughout every area of the Park because I had to squeeze in my run during hectic work days. Regardless of the number of stress items on my “to do list,” the Park’s calming hormones worked their magic as soon as I entered the tree-lined sanctuary.

During the first two years that I served on the management team of “The Peachtree”, the race finished at 5 Points in the downtown district. As I was looking for ways to improve the course, I was inspired to change the finish to Piedmont Park during my one of runs from Phidippides. With the help of Director Bill Neace and our Public Affairs Director Bob Brennan, we were able to make this move which is now noted as one of the race highlights.

A special sighting occurred on one my pre-dawn runs in 1978 along Lake Clara Meer. There was a vehicle ahead with some runners in a tight group headed toward me. Since vehicles were not allowed in the park, I was curious. On the outside of this group were several huge guys intently looking at me. As the group ran under a streetlight, I saw President Jimmy Carter on his morning run!

“As the group ran under a streetlight, I saw President Jimmy Carter on his morning run!”

While Piedmont Park was a wonderful resource during the ‘70s and ‘80s, there were a number of problems including areas that were not very safe. This was BC: “Before Conservancy,” which was founded in 1989. There has been a dramatic upgrade in the Park, including safety, due to the work of this great organization.

My favorite run into the Park starts on the BeltLine behind Ansley Mall and into Piedmont Park without having to cross a street. I love to see the dogs in the dog park and then run over to Park Tavern and up to Lake Clara Meer. My Galloway Training Program members have run thousands of miles in Piedmont Park. I trained for my personal marathon record there (2:16), finding an ideal variety of flat and rolling terrain all inside the Park. My wife Barbara and I are proud to host a 5K, half marathon and kids runs on December 14 and 15 with the major beneficiary being the Piedmont Park Conservancy. This year, we have an exciting new relay division of the half marathon for walkers and runners during the Northside Hospital Orthopedic Institute’s Half Marathon, powered by Jeff Galloway. Gather your friends, co-workers, and family members to enter a team. The last segment is less than three miles and entirely inside beautiful Piedmont Park. I will be at the finish line for pictures and congratulations.

I have run in many great parks across the globe. Piedmont Park is truly “world class” due to the work of the Conservancy. Join us for our 6th Annual Race Weekend and support this wonderful organization. Register today at www.jeffgalloway131.com.

Author Bio: Native Atlantan Jeff Galloway ran in the Munich Olympics, founded the first running store in the US (Phidippides), has coached over a million runners and walkers, and directs the Northside Hospital Orthopedic Institute’s Half Marathon, powered by Jeff Galloway which finishes in Piedmont Park. Strength is Sexy…Time to Flex 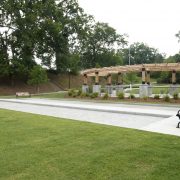 Piedmont Park: A Place for Friends Three Ways to Turn Piedmont Park Into Your Gym Testing on Treats: Children and Teens Become Scientists for Halloween